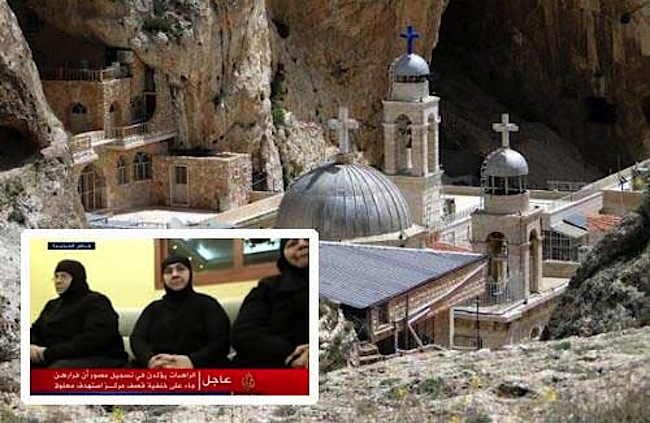 A pro-Syrian government news network and Lebanese State media reported that the thirteen Greek Orthodox nuns and three maids that were kidnapped in late November from a Greek Orthodox monastery in Syria were freed on Sunday, March 9, 2014.

AP calls the incident “a rare successful prisoner exchange deal between Syrian government authorities and the rebels” seeking to overthrow the rule of President Bashar Assad.

The senior Greek Orthodox Bishop Louka al-Khoury waited to greet the group at the borders. He stated at the pro-government TV channel Ikhbariya, that the negotiations for the release of the hostages took several months due to the unrealistic demands made by the kidnappers in an attempt to stall the process.

In December, the Syrian news agency SANA reported that armed terrorists took the nuns, implying that behind the attack are anti-regime rebels.

The chief of an opposition group based in London told CNN he had confirmed that al-Nusra Front fighters abducted the nuns, but Rami Abdurrahman said the fighters did so to protect them from what the group believed would be an impending attack by Syrian government forces.

CNN could not confirm Abdurrahman’s account of why the nuns were taken from the Monastery of Saint Tecla in the predominantly Christian village of Maalula, about 40 miles west of Damascus. Abdurrahman leads the Syrian Observatory for Human Rights, based in Great Britain.

The U.S. State Department has designated al-Nusra Front as a terrorist organization with ties to al Qaeda.

Ten percent of Syria’s population are Christians. The presence of Christianity in Syria has an old history since Jesus was baptized there and some of the earliest relics were found there. In addition, Maalula is one of the last places where Jesus’ language, ancient Aramaic, is still the main language.

The regime of Bashar al-Assad has many supporters from the Christian community as they fear that an end of his presidency could lead to instability.