A Greek Comedian in London 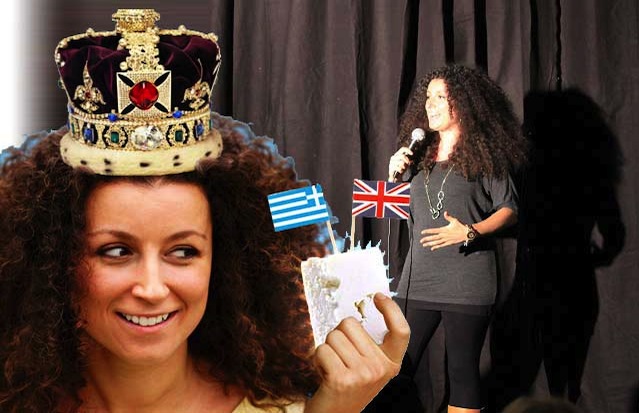 Katerina Vrana was raised in Athens, Greece, but later decided to move to London to study and pursue a career as a comedian and an actor. Since then she has become a very successful stand-up comedian who manages to make audiences from all over the world laugh. She has performed in the UK, Greece, Australia and the U.S. and was named one of CNN’s “Female Comedians to Watch.”

With her undisputed sense of humor, Katerina spoke to Greek Reporter about her adventures as a comedian in the UK, her show “Feta with the Queen” and of course about her plans for the future.

You usually return to Greece for small periods of time to do some shows. Do you find that Greek audiences are accepting of stand-up comedy?
The majority of Greek audiences do not have a lot of experience with stand-up. Though it’s been around in Greece since the mid-nineties and there’s actually a lot of it to be found within comedy plays and cabaret shows, Greek stand-up comedy, as an art form in and of itself is becoming more widely known only now. So it’s not so much a case of being accepting, it’s more a case of being familiar with it and the Greek audience are only just becoming familiar with stand-up. It’s lovely to see how much the Greeks laugh. They howl.

You started the first open-mic night in Greece called “5 Minutes of Glory.” Can you tell us something about that?
Myself and Lambros Fisfis, another Greek comedian who started his career abroad, both felt that in order for new comedians to get more chances and for audiences to familiarize themselves with stand-up, we needed to have open mic nights which didn’t exist in Greece until then.
There was no night specifically designed to nurture and showcase new acts or give established acts the chance to try out new material. So, Lambros and I decided to start up the first ever open mic night in Greece and called it “5 Minutes of Glory.” We ran it monthly for about a year together and now we’ve given it over to another comedian, Dimitris Christoforidis to run.

What are the main subjects of you show? Does the audience and the country you are performing in, influence it?
At the moment, my show is all about my experiences as a Greek living abroad and the role stereotypes play in our perception of other cultures. As most of my adult life has been spent between Greece and the UK, my show tends to focus on those two countries but I’m slowly incorporating more and more countries in it. Now that I have been to Australia 3 times in one year, I have quite a bit of material on Australia so that gets added in when I play there and some of the UK material gets left out.

How did you come up with the title “Feta with the Queen?”
Well, I explain this in the very beginning of my show as well. I wanted a title that immediately evoked the two countries I’ve spent most of my life in which are Greece and the UK. “Tea with the Queen” is a universally understood concept to do with the Queen of England, and “Feta” is a universally known Greek cheese. Put the two together and you have what I think is a simply awesome title. I mean, I could have called it “Moussaka on a Double-Decker” but it just doesn’t sound the same.

How would you react in a situation where the audience seems indifferent?
It used to kill me, now I’ve learned to just keep going. I like to try to break away from prepared material and chat to them a bit so we can get to know each other a bit better and that usually gets results. But there are times when nothing works. Those are horrible, horrible times. You can hear the tumbleweed.

Is it easy working abroad as a Greek comedian? Would you ever consider returning to Greece for good?
I think working as a comedian is difficult full stop. Regardless of nationality, cultural background, gender, religion, age, comedy is difficult. I find it hugely rewarding and I love doing it but there is no denying that it is a hard road to go down. So I don’t know how much being Greek is part of the difficulty. In some cases, it’s made my life easier because there are Greeks everywhere so I have a ready audience who is interested in what I have to say. And right now I wouldn’t consider returning to Greece for good but I’m definitely trying to come back to Greece more often for shows. In fact, I’m planning for some shows in Athens for beginning of April, as soon as I get back from Australia.

Do you have any advice for young people who wish to pursue their dream in acting and comedy?
Oh god… I have no idea what to advise. If you really want to do it, and your heart is set on it, then don’t give up. Acting, comedy and any kind of performance is hard and you will get rejected again and again and again. If you can stomach that, stick with it, and keep improving.

Finally, what are your future plans?
Global domination! And a Nobel Peace Prize. I mean, an Oscar would be nice, too. But global domination is my ultimate goal.