Riots in the Center of Athens Greece 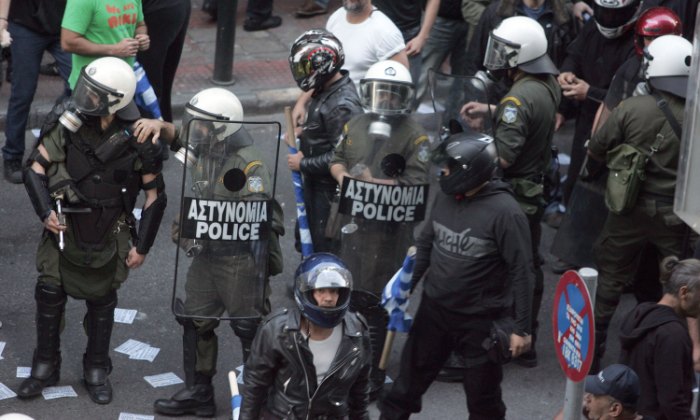 A few hours before Troika arrived at the Greek Ministry of Administrative Reform to meet with the Minister Kyriakos Mitsotakis, members of the Greek Federation of Secondary Education State Teachers (OLME) gathered outside the ministry. It wasn’t long  before tension arose and chemicals were used by police to control the riots.
At 6am on Friday morning, about 70 members of OLME arrived at the Greek Ministry of Administrative Reform and attempted to enter the building.
However, the building’s security noticed them, closed the doors and called the Greek police. According to SKAI television, 4-6 Greek Police Riot Units (MAT) arrived outside the ministry.
Apart from OLME’s trade unionists, school security guards and cleaning women in suspension also arrived at the Greek Ministry of Administrative Reform.
According to eyewitness testimonies, MAT used chemicals to repel the gathered teachers from the ministry’s courtyard and proceeded to arrests. Among those arrested was the president of OLME Themis Kotsyfakis.
According to Mr. Kotsyfakis’ statement, seventeen people were arrested, sixteen teachers and a school security guard. All of them were transferred to Greek police’s headquarters.
“We did not close the streets, we did not disturb anyone. The democratic regime has been abolished,” claimed the president of OLME and continued that the Federation has requested a meeting with the Greek Minister Kyriakos Mitsotakos to discuss the availability scheme.
Meanwhile, Troika inspectors along with Mr. Kyriakos Mitsotakis arrived at the Ministry of Finance for their scheduled appointment amid jeers.