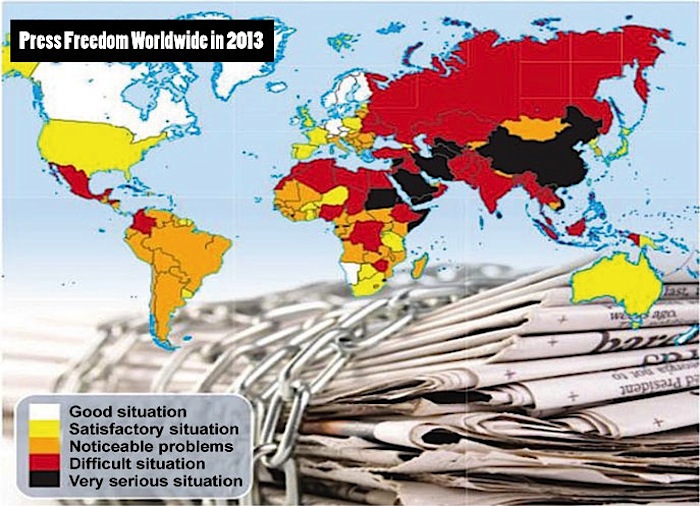 Reporters Without Borders have noticed a further decline in press freedom in Greece. The organization recently published a report that depicts the sad truth about press freedom around the world. In the 2014 report Greece held 99th place, 14 places lower than last year and 28 places lower than 2012.
According to the report, the effects of the economic crisis and constant rise of populism are the main causes for the press freedom restriction in Greece. Delphine Halgand, U.S. representative for Reporters Without Borders said that Greece’s downward plunge is “due to many factors. One of them is the number of violent attacks against journalists, which are mainly due to a neo-Nazi party that recently entered the Parliament. Another factor that explains this decline is the Greek government’s decision to close the national broadcast (ERT) which included many radio and TV channels.”
The U.S. appears to have also dropped significantly. The country placed 46th this year in comparison with 2013 when it was in the 33rd place. The UK also dropped to the 33rd place this year.
However, Turkey is mentioned in the Reporters Without Borders report as the example of a country that took advantage of the fight against terrorism to satisfy certain ambitions. The country placed 154th due to dozens of cases involving violence against journalists, as well as arrests.
Overall, the report mentions that there was a significant restriction in press freedom in many countries, such as the U.S. and Greece but there were also many countries who showed improvement such as Ecuador, Bolivia, and South Africa.
The three countries that ranked first are once again Finland, the Netherlands and Norway, while the three countries that ranked last in this year’s index are Turkmenistan, North Korea and Eritrea.
[youtube]AQj0TIybXV8[/youtube]