Four Greek Music Festivals that Will Rock You 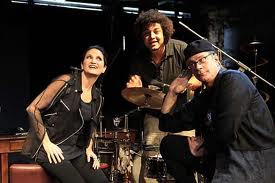 Even though Greek Music Festivals were not really popular back in the day, it appears that they have recently become rather popular. Every year, music festivals are a topic of conversation for young Greeks who await and plan for months in order to buy a ticket and take part in the music world. GreekReporter presents some of the most famous Greek music festivals.
Let’s begin with the well-known River Party that has been organized every summer for 35 years outside the village Nestorio in Kastoria, Greece. Every summer the riverside of Aliakmonas is filled with more than 50,000 visitors who go to enjoy music concerts. Visitors of River Part don’t just go for the music. The unique landscape offers a great place for music fans to go camping and stay within 100 feet from the main stage. Every year the amazing line-up consists of famous Greek and foreign artists. If you love nature and camping then you will certainly enjoy this experience. The only thing you will need is a tent, a mattress and some good company, everything else is provided!
Just a few miles outside of Athens, in Malakasa, Rockwave Festival is held every year. It started in 1999 but became very popular with Greek public in 2004. This festival only lasts three days but each year it hosts famous singers from Greece and abroad. It is widely known for its scene dimensions that exceed 400 sq.m., the state of the art sound system, the digital consoles and wall screens. It is worth it for everyone to be part of this experience at least once in their lifetime.
The Greek Musical Festival EJEKT is also an annual affair that takes place during the summer at the Water Square in Athens, right next to the sea. Every year the line up consists of big names from the music scene as well as emerging pop, rock and electronic music artists.
Finally, the Ardas Festival differs slightly from the above. In 1995 a group of restless young people from a village called Kastanies dreamed of a music-camping festival by the river, near the three border area between Greece, Turkey and Bulgaria that would become a cultural meeting place for young people from the three countries. Soon, the festival became an institution and a favorite destination not just for the visitors, but also for the artists. Besides attending concerts, people can also go cycling, play football or beach volleyball along with many other activities. It is also common for Greek traditional dance groups to entertain and teach dances to visitors.
One thing is for sure, you will have a great time no matter which one you choose to attend!
(Edited by Ioanna Zikakou)