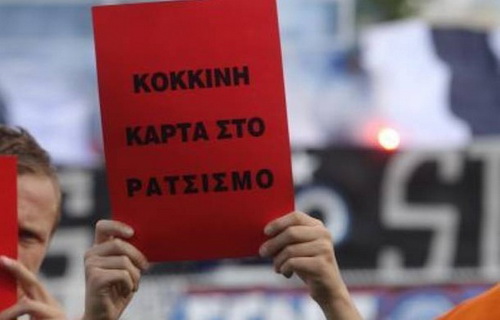 The incident that took place earlier this week involving a boat transporting illegal immigrants in the Aegean Sea and the Greek coast guard, has triggered many anti-racist demonstrations which are scheduled to take place in the following days.
The anti-racist initiatives and immigrants’ communities calling for the demonstrations mention in their invitation, “The Fortress Europe” murders even children. Political and criminal responsibilities are to be brought immediately.” They also note that these deaths come as a direct result of the cruel European and Greek policy targeting illegal immigration, which exposes human lives to great risks. The network consisting of many communities and anti-racist initiatives are scheduled to round-up Saturday noon at Syntagma square.
Furthermore, another rally is being scheduled for the afternoon of Thursday, January 30, by more immigrants’ communities initiatives against racism, students and syndicates. In their statement, the organizations compare the incident in Farmakonisi to the capsizing of a boat carrying illegal immigrants off the coast of the Italian island of Lampedusa in October 2013, which led to the death of at least 300 people and to the outcry of the international community. The statement says, among others, “The gruesome crime committed by the Greek coast guard in Farmakonisi leading to twelve deaths, among them eight women and children, is as brutal as the crime in Lampedusa.”
“The complaints of the UN High Commissioner for Refugees leave no doubt for the criminal responsibilities of the authorities. It is not the first time that immigrants drown in their vessels while being repelled from the coast guard to get back to international waters, with their inflatable boats being punctured with knives and women and children being let to drown,” continues the statement.
A full report on the incident can be read here and here.