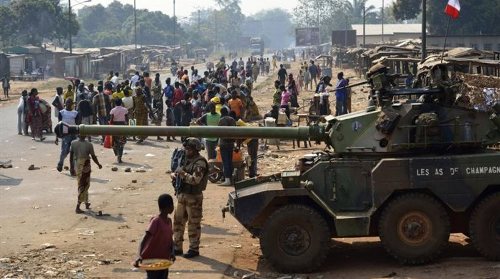 The Greek Foreign Minister, Evangelos Venizelos, made it crystal clear to his European partners that “Greek soldiers will not participate in any army operation that will take place in the territories of the Central African Republic”. The Member-States of the EU are expected to decide at today’s Foreign Affairs Council (FAC), the activation of the European “battle groups” and whether they will sent troops to the Central African Republic as there are fears that a new humanitarian crisis is knocking on the door.
France has already sent troops to the African country, however, the Europeans believe that more peacekeeping forces must be sent to the Central African Republic in order to stop the hostilities between the locals.
The activation of the European “battle groups” is expected to have been officially decided in today’s meeting of EU’s Foreign Affair Ministers that took place in Brussels. The Swedish Minister of Foreign Affairs, Carl Bildt, called his Greek counterpat, Evangelos Venizelos to persuade him that the activation of the European “Battle Groups” would be a wise move at this point. Mr. Venizelos responded to the Swedish Minister that Greece will not become involved in a military mission by sending soldiers. The Greek Foreign Minister proposed to his European partner, to run the military operation from the EU’s headquarters in Larissa. The Greek officials believe that with this counteroffer, the participation of Greek Military officials in the operation will be avoided.