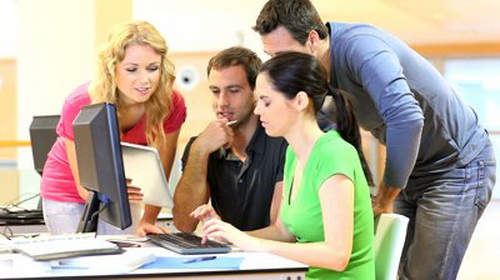 When her German colleagues approached with a birthday cake, Sofia Mitsopoulou couldn’t believe it. This was the first day of her internship at a large German bank in Luxembourg, and the welcome was more than warm. “This far exceeded my expectations,” said the 27-year-old economist with an M.A. in Finance, to Greek “K” magazine.
During recent years more and more Greek students and young people have grasped the opportunity to undertake internships with companies or public institutions abroad. “I had decided to accept any offer made by my bank, even if it was another internship,” said Sofia after being accepted for another six months at the bank. In Greece she rarely found job advertisements related to her studies. “I recently held a part-time job at a consulting company in Thessaloniki, where I got just €400 without any insurance contribution. In Luxembourg, the salary is €2,300 net.”
One of the several institutions offering young people from Greece the chance to visit and work in another country is the Bodossaki Foundation, which launched in 2009 a scholarship program for young people up to 32 years-of-age. “To date we have sent 35 young people to Belgium, Switzerland, Luxembourg, Germany, Denmark and the Netherlands,” explained the secretary of the Foundation Sotiris Laganopoulos. The Foundation contacts foreign embassies, which in turn provide a list of companies that are willing to employ Greek scientists. “We cover travel fares and provide a salary which equates to living expenses in the host country for six months. In most cases, companies pay a bonus for housing,” added Laganopoulos.
A similar program for youth and student movement across Europe is offered by the European Union. The extensive Erasmus program, part of which is the Erasmus Placement program for internships, has given the opportunity to over 3.5 million students to travel, study and work across Europe since its launch in 1987. Now, a new and more updated version of the program, Erasmus+ (2014-2020), has been launched by Androulla Vassiliou, European Commissioner for Education, Culture, Multilingualism and Youth. With a total budget of €14.7 billion, 40% higher than previous programs during 2007-2013, more than 4 million young people will receive support from the EU to study, train, gain work experience or volunteer abroad over the next seven years.
“Living in the UK is a unique experience,” said Abed Alloush, who moved to London together with fellow students from the Greek Ionian University on the island of Corfu. The students from the Department of Foreign Languages, Translation and Interpreting used the opportunity provided by the ERA-PLACES internship program and are currently working at the London-based greekreporter.com news-portal, ensuring a steady flow of news on the site’s English edition. “We take everything concerning Greeks from all over the world and translate it into English. Apart from being just translators, we also write our own articles, gaining experience as journalists. Combined with working in London and meeting new people with similar interests to us, ERA-PLACES has given me an opportunity I would not have been able to achieve without the help of this EU grant,” said Ioanna Zikakou, who also works at the news-portal.
In contrast to Greece, foreign employers encourage young people and are actively trying to recruit Greek students and it is not unusual for employers to extend the initial internship.