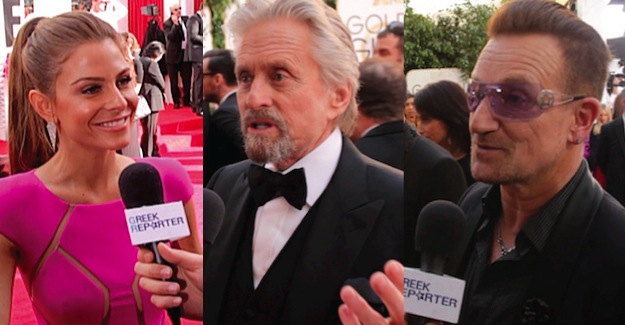 Some of the biggest stars in Hollywood stopped by Greek Reporter’s camera on the 2014 Golden Globes red carpet and talked to us about the awards show, their work and of course, Greece!

[youtube]xhlVvIn8cs0[/youtube]
Although Alexander Payne’s Nebraska was nominated for 5 Golden Globes, The Greek-American filmmaker had to find another reason to convince his mother to watch the awards show on TV.

[youtube]LTrmR-eKz2A[/youtube]
Adele Exarchopoulos, the French actress whose last name comes from the Greek family of her grandfather, revealed that her career is booming after the success of her movie “Blue is the Warmest Color / La Vie d’ Adele”

[youtube]tSW0GPYUM8g[/youtube]
Watch Leonardo DiCaprio backstage talking on the balance between his real self and the roles he has to portray.

[youtube]GjGhhuYU0WQ[/youtube]
Watch “God-sent” Bono talking about “Mandela,” the movie for which U2 wrote the original song and won a Golden Globe… and of course Greece: