Greek Orthodox Blessing of the Waters in Australia 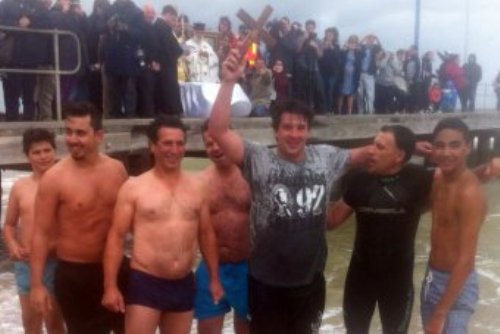 Despite the bad weather at Frankston, south of Melbourne, many people attended the annual Greek Orthodox ceremony of the blessing of the waters.

According to Greek Orthodox custom, a wooden cross is thrown into the water and swimmers chase it down. The person who retrieves the cross is blessed with 12 months of prosperity and good luck. The same ceremony takes place at Frankston Pier every year. According to the Greek Orthodox community, this is the day that Jesus was baptized and the ceremony celebrates this event.

At Frankston, about 3,000 people were expected to attend. However, winds of over 40 kilometers per hour and choppy surf almost led to the cancellation of the event.

In the end, eight brave young men dived into the water, after the cross thrown in by Father Doukas Georgalas. Nathan Taylor, a 31-year-old from Somerville, was the first to reach it. He is hopeful that retrieving the cross will bring him good luck as he and his wife are expecting a baby.