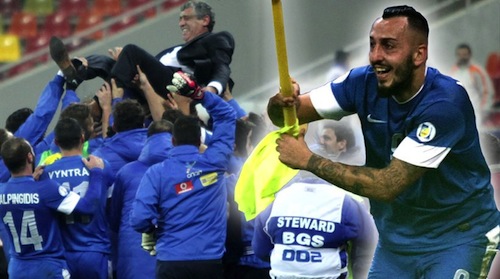 Victory is the only word that describes the Greek international football players as well as Fernando Santos, after defeating Romania in the World Cup qualifying playoff second leg match, at the National Arena in Bucharest (1-1).
Kostas Mitroglou scored the goal, and was the one who sent the team to the final phase of the World Cup; a fact which was celebrated wildly by the international players.
The Portuguese technician, Fernando Santos, was so excited, he even spoke in Greek!
After the game, the National team departed immediately to return to Greece celebrating, and singing victory songs during the entire journey! 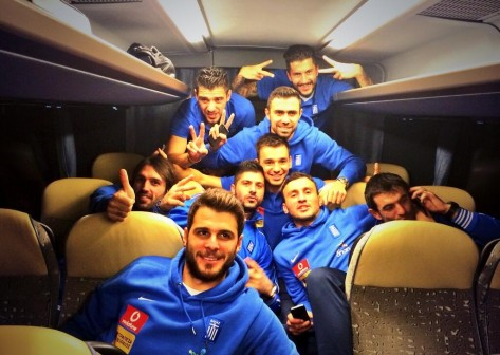 The mood was festive, not only before boarding, but also on the flight back home. Players were acting like little children over their success, as they did in the locker room.
When the plane landed at the “Eleftherios Venizelos” airport at 4 in the morning on Wednesday, 50 fans who were there, welcomed the players and the technical staff of the National team, with applause.
Someone gave flowers to Giorgos Karagounis, and as soon as they saw the team began to shout: “Hellas ole ole”!
Papoulias and Samaras congratulate the national team for World Cup qualification
Greek President Karolos Papoulias and Prime Minister Antonis Samaras have congratulated the country’s national soccer team after they qualified for the World Cup finals late on Tuesday. Papoulias noted that the team’s “great success” had made “all Greeks feel truly proud,” while PM Samaras also praised Greece’s efforts and wished the team plenty of success in Brazil next year.