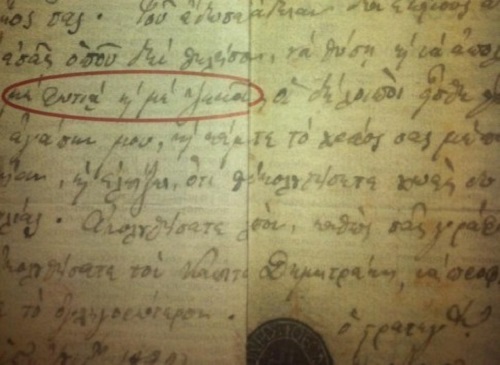 After the initiative of the Minister of Culture Panos Panayotopoulos, the Greek State purchased the two historic letters of Theodoros Kolokotronis.
The negotiations between the Greek State and the owner of the letters, took place in the last 24-hours. The Greek State paid 4,000 Euros for each one.
The one letter was written in 1822, from Theodoros Kolokotronis to Dimitrakis Plapoutas. This letters proves that the expression “fire and sword,” which became known from another Kolokotronis letter, was written four years earlier. In this letter, Kolokotronis describes his effort to persuade people to help the siege of Patra.
The second letter addressed to Dimitrakis Plapoutas, Georgio Dimitrakopoulos and Nikolao Boukouras is aged from November 17, 1822. In this letter Kolokotronis explains to them what the next moves will be.

Over 18,000 Coronavirus-Related Deaths in Greece Since Start of Pandemic