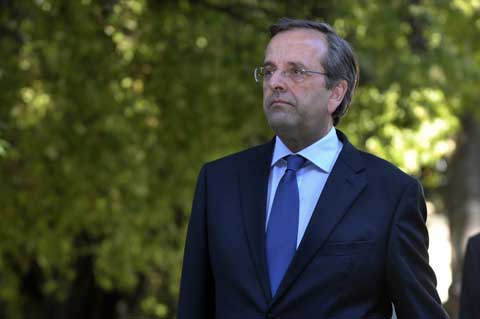 A high-level delegation headed by Greek Prime Minister Antonis Samaras will attend the funeral of former Cyprus president Glafkos Clerides, who died on Friday at the age of 94.
The Greek delegation will also include Vice President and Foreign Minister Evangelos Venizelos, Chairman of the Greek Parliament Evangelos Meimarakis and Greek Defence Minister Demetris Avramopoulos.
Clerides’ funeral will be held on Tuesday and following a decision by the Council of Ministers on Sunday, a Book of Condolences will open at the Presidential Palace Monday to be signed by President Anastasiades, members of the Council of Ministers, chiefs of Foreign Diplomatic Missions and state officials.
Archbishop Chrysostomos II will officiate at the funeral at Ayia Sofia, to be held on Tuesday at 11:00am. Annastasiades will deliver the eulogy.
Clerides will be then buried in a family grave at the Saint Constantinos and Saint Eleni cemetery.
Clerides’ family has said that instead of the laying of wreaths, donations can to be made at the Committee on Missing Persons (CMP).
(source: cyprus-mail)