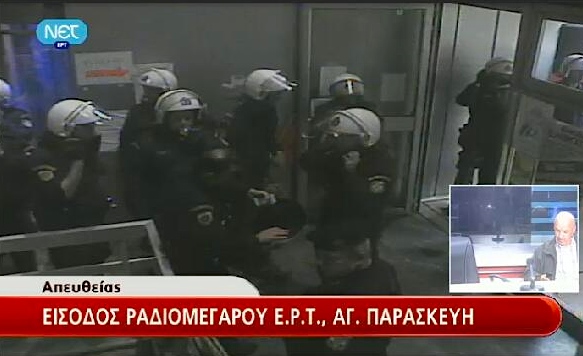 A sudden operation to evacuate the Greek National Broadcaster’s (ERT) headquarters was carried out by Greek riot police Thursday morning in Athens, Greece.
Greek riot police forces, accompanied by a public prosecutor, gathered around the ERT building in the Agia Paraskevi area at about 4:20 am, and then proceeded to the entrance of the building asking employees to leave the premises.
Fired workers of the national broadcaster ERT–which was shut down on June 11 by the government–had been operating from their old headquarters via satellite and over the Internet demanding the reopening of ERT when police went through every single room of the building and pushed them outside the premises. Four union members were detained, among them Nikos Tsimbidas , a representative of the ERT employees union Pospert. They were released a few hours later.
The government had described their decision to stay in the building of their former employer, as illegal occupation of public property. Greek government spokesman Simos Kedikoglou said that the police did its job to help the government take control of a building that belongs to the Greek State. Deputy minister for public television Pantelis Kapsis stated that he wasn’t aware of the operation, since the ministry of public order was in charge.
Greek riot police has blocked all entrances of the ERT headquarters, while journalists still remain outside the building together with riot police. Members of the Greek Parliament are also outside the ERT building and are demanding to enter the headquarters, but police are not allowing anybody to enter the building.
After the operation, crowds of supporters started rallying outside the main ERT building. A witness told Greek Reporter that “an increasing number of people are gathering outside the building to show support to the former ERT employees.”
“Τear gas is being thrown, to clear people gathered outside the national television ERT ‘s building.” reported a former ERT employee on twitter.
“The battle for democracy and social justice which ERT workers have been fighting for more than four months, has reached its most crucial moment,” read a message on ERT’s Facebook page inviting people to protest with them. “It’s time to act, rally now!”
Police, together with the prosecutor and a representative of the employees, are inside the building to check on equipment and register the company’s inventory. The prosecutor said that the person responsible for ERT’s inventory is now the “brigadier general” of the police forces.
Former employees have stated that the buildings and inventory of the headquarters were intact.

The station’s 2,656 workers were let go on June 11 without notice. ERT was largely considered a dumping ground for political hires with alternating administrations between Prime Minister Antonis Samaras’ New Democracy Conservatives, and his coalition partner and Deputy Prime Minister, Evangelos Venizelos’ PASOK Socialists, packing it with high-paid political hires and no-show jobs.
While ERT, along with other stations it broadcasted, such as the BBC and Deutsche Welle, remained blank on TV stations, the former workers were still broadcasting by other means from the Athens headquarters.
ERT’s shutdown caused national and international uproar and led to the departure of the three-party coalition’s smallest partner, the Democratic Left (DIMAR) leaving Samaras to bring in Venizelos, and appoint PASOK ministers after the Socialist withdrew his objection to the firings.

Watch a video from the operation outside ERT today: