Crete: Farmers Protesting in the Streets 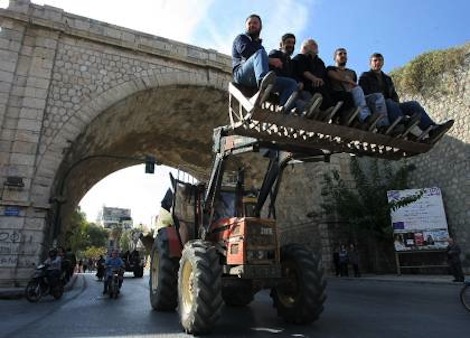 The farmers in Crete were gathered on Monday morning in the streets of Heraklion. The farmers from every corner of the island, from Ierapetra and Viannos to Messara and Chania, raised their voices against the plans of the Greek Government for taxing their agricultural parcels.
With tractors, agricultural vehicles and other means, the protesters heading to the center of Heraklion blocked the streets, causing total traffic confusion.
Six buses transported farmers from Timpaki to Heraklion, while farmers from Chania and Lasithi arrived in Heraklion by car. Many protesters came from Ierapetra, Viannos and Rethimno.
This mobilization follows the symbolic occupations of the tax services of Crete by the representatives of the agriculture industry.
The farmers occupied the building of the Region and hung banners. A delegation of the farmers asked the Regional Governor of Crete Stavros Arnaoutakis to intervene, asking the removal of the police forces, as  there wasn’t any safety issue. The police forces who were lined up in the Region, were discreetly removed.
The Regional Governor, the Regional Vice Governor, Theano Vretzos and the City Council President George Pitsoulis, had a discussion with the farmers, who are expected to submit a resolution; they are asking the regional authorities to vote against the bill that foresees taxation of their land.  The mayor of Heraklion supports the farmers.