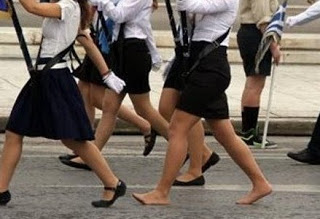 In Thessaloniki, during the parade for the celebration of October 28, known as “Oxi day,” some schoolgirls found a rather original way to protest. Pictures published by seleo.gr, show them parading barefoot. They managed to draw the attention not only from the local and Greek media but also of websites and media throughout the world. The girls probably chose this way to protest against government policy.
Another girl chose a similar way of protesting during last year’s parade in Syntagma, Athens. That girl who was also holding the Greek flag, as the first student of her school, paraded barefoot in front of the platform of the officials and she become the face of the day.
It appears that apart from adults and employees, students also express their disapproval of the government and the tough policy that degrade Greek people’s life.