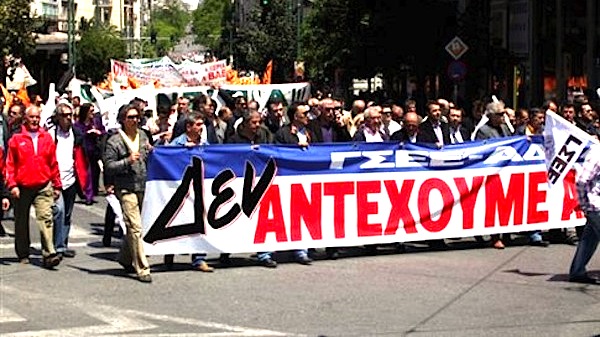 Testing the patience of Prime Minister Antonis Samaras who said they wouldn’t be allowed to strike for even a single day, Greek high school teachers are continued their series of rolling strikes into a second week on Sept. 23, with other sectors joining in as a protest against government plans to suspend, transfer and fire up to 40,000 workers over the next two years.
Samaras said he has no choice but to follow the orders of the Troika of the European Union-International Monetary Fund-European Central Ban (EU-IMF-ECB) which tells him how to run the country and demanded harsh austerity measures in return for $325 billion in two bailouts.
Led by labor unions, strikers were set to demonstrate again the center of Athens across from the Parliament whose workers have been exempted from more pay cuts, tax hikes and slashed pensions and enjoy so-called “special salaries.”
And while the government is firing people across the board in other sectors it is hiring workers in a Parliament critics said is already stuffed with needless political appointments with extra privileges.
The public sector union ADEDY, under a new and more aggressive leader, said there would be another 48-hour strike on Sept. 24-25 repeating its two day strike of a week earlier. The union chiefs are in talks with GSEE, the country’s largest private sector union, about coordinating their actions for a general strike.
The employees in higher education have decided to go on another five-day strike, while secondary-school teacher union OLME has announced a strike for Sept. 23-24, continuing to defy Samaras, and they will joined by primary school teachers who will strike with ADEDY.
Local government workers said they won’t work on Sept. 23-24 and employees in the insurance funds have announced a series of rolling 48-hour strikes starting Sept. 23, upsetting Samaras’ plans to quell social unrest while he tries to right the economy.