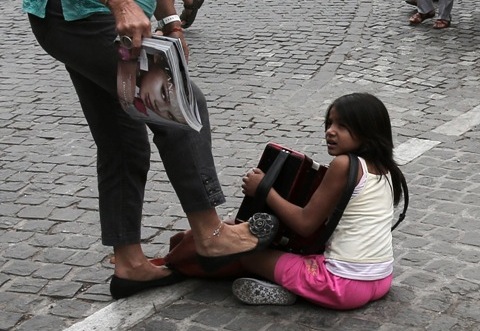 A photograph of a female shop owner pushing a little Roma girl street musician on a pedestrian walkway under the Acropolis to send her away has taken off on the Internet and set Greek authorities to investigate the apparent abuse.

The site is frequented by Roma children who are put there to beg, play music for donations or sell flowers, activities that in Britain were found to bring in as much as $160,00 per children, making it a very lucrative business.
The photo was taken by Associated Press photographer Dimitris Messinis at one of the busiest tourist spots in Athens, near a main Metro station and the New Acropolis Museum. It was not reported why the woman wanted the girl away from the area but it happened in front of many witnesses.
The image is shocking: A woman is kicking a girl who plays the accordion in order to drive her out of the point, perhaps because the girl offended her aesthetically.
After the uproar caused by the publication of the photograph, the Department of Child Protection of the Security of Attica launched an investigation to try to find the woman.