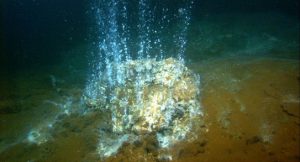 Greek scientists from the University of Athens and the Hellenic Center for Marine Research (HCMR), who explored the Columbo volcano’s bottom at an underwater 500-meter depth, found that rare phenomena never observed in the world before have been taking place in the geothermal field of this submarine volcano located north east of the island of Santorini.
The results of their work was published on August 13 in the famous, prestigious scientific journal Scientific Reports (Nature Publishing Group). These results indicate that deep under the volcano, “extremely effective bio-geochemical processes of metal deposition have been taking place, as Stephanos Kilias, head of the research group and Associate Professor of Economic Geology at the National and Kapodistrian University of Athens, told the Greek newspaper Ta Nea.
In the magma chamber of the submarine volcano that stretches five kilometers into the Earth’s crust, natural processes that belong to the cutting edge of the modern inter-scientific knowledge and research, such as Geo-biology and Bio-geochemistry are proving to be true.
Gold, antimony, thallium, silver, arsenic, mercury, zinc and carbon dioxide, at quantities that have never been recorded before, along with microorganisms that behave in an unusual way and seem to play a determinative role in the metals’ creation –and not only- compose the unique physiognomy of this volcano.
“The volcano resembles a hopper, the deepest point of which is 504 meters. There, at its bottom, which consists of solidified lava, there are cracks through which carbon dioxide is attracted at 99 percent, as well as some formations, which are called hydrothermal chimneys and consist of metals such as gold, antimony, silver and thallium,” as Paraskevi Nomikou, Lecturer of Geological Oceanography at National and Kapodistrian University of Athens, stated.