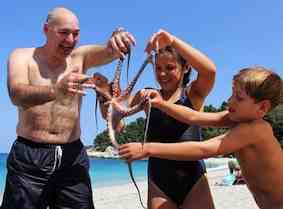 A Greek man caught a very rare six-tentacled octopus, while he was on vacation with his family in Pelion.
According to a publication of the British newspaper Daily Mail, 49-year old Labros Hydras, who was born in Greece and now lives with his family in Washington, caught the rare mollusk while he was fishing.
Then he asked for the chef of a tavern to cook it for him, but the man refused. After Hydras cooked and ate it he asked the chef to explain why and was told it should have been allowed to be free because of its rarity.
Hydras reportedly then said he felt upset at what he had done. “I thought it had been born with six tentacles. We go to Greece every year and when we catch an octopus, we do the same thing so we just did not think about it. I wanted to find out more, but there was no internet where we were. I then called my friend who is a biologist and he told me it was true and I was horrified,” he said.
He added: “It is the least that I can do given my ignorance and guilt that I feel for killing such a rare  animal.”