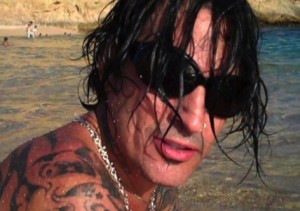 Musician, DJ and drummer Tommy Lee has just touched down in Greece, and he’s sharing plenty of hellenic culture with his fans and followers on his social media accounts.

A founding member of legendary rock band Motley Crue, Lee was born in Athens, Greece and has proudly acknowledged his Greek heritage. His mother, Vassiliki Papadimitriou, who passed away in 2012, was a Miss Greece contestant in 1957.

On his Twitter account two days ago, Lee posted, “the Motherland! I’m home!,” with a photo of the Greek flag flying high. Adding to his tweets, he later wrote, “MuthafugginOPA!!!,” and also posted a video to his Vine of Greek music playing with the comment, “Gimmie a Greece-y beeeeeeet!”

With all the photos and videos, Lee has not said specifically where in Greece he is visiting, and many of his fans have been replying and commenting trying to figure out his location. To follow Tommy Lee, and his current travels in Greece, check him out on Twitter: @MrTommyLand.