Thessaloniki Gets A Tourist Boost 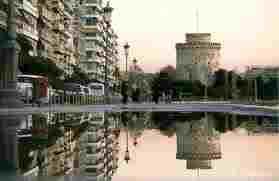 For the first time in four years the number of overnight stays in hotels in Thessaloniki, Greece, for the first semester in 2013 of Greeks and foreign tourists has increased.
Russians are the biggest foreign visitors to Greece’s second-largest city, even more than Cypriots. According to data by the Thessaloniki Hotels Association, the increase percentage compared to previous years reaches 62.21 percent with 35,968 overnight stays, classifying the city as one of their favorite destinations.
Cypriots, who are beginning their own economic crisis, so far are still coming, with 31,765 in 2013 compared to 28,969 during the previous year, while Turkish visitors increases registered 50.1 percent as well.
The return of Israeli tourists gives a hopeful message for the tourist development of the city, having an increase in bookings in relation to the previous years, reaching 67,92 percent.
According to the Association, the nationality that presents an important decrease concerning the number of visitors in Thessaloniki are Libyans, who have fallen to number 11 from number one. Despite the fact that visitors from Libya stay in facilities integrated into the residency program and health recovery of those wounded in the recent armed conflict in the region, they leave huge profits to the city’s hotel units.
The number of Greeks from other places in the country who pick Thessaloniki continues to be disappointing with an increase of only 6.67 percent.