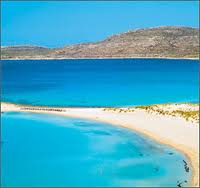 The well-known travel website TripAdvisor.com, based on the votes it collected by travelers who visited Greek beaches in 2013, presented the top 10 of the most beautiful  beaches in the country.
Elafonisos, a small Greek island between the Peloponnese and Kythira, topped the list. The island is famous for its light colored, sandy beaches. Among the most well known of its beaches are Sarakiniko, Fragos (Simos) and Panagias Nissia, all filled with blue-green waters.
According to TripAdvisor’s voters, the second most beautiful beach in Greece is St Paul’s Bay, in Lindos, Rhodes; a small shallow bay in the colors of emerald, surrounded by rocks.
The third place in the winners’ podium was occupied by Palaiokastritsa,  in the North West of Corfu.
Balos in Chania on the island of Crete, an idyllic, very shallow lagoon with white sand follows.
The famous beach Navagio (or the Shipwreck) on the coast of Zakynthos, in the Ionian Islands of Greece comes fifth,  while Koukounaries beach on Skiathos, in the Sporades group is sixth.
In the seventh place we find Porto Katsiki, on the Ioanian Sea island of Lefkada, which is one of the most famous beaches in Greece and Europe in general. In English it means Port of the Goat, because in the past the area was accessible only to goats.
Stalida, that lies between Malia and Hersonissos on the north coast of Crete, comes eighth. It is a lively resort, attracting tourists from many European countries. It has a long, sandy beach and a variety of bars and tavernas. Popular with families, it is 30 km from Nikos Kazantsakis airport in Heraklion.
Perissa in Santorini, with its impressive long black sandy beach, is in the ninth position.
Egremnoi Beach in Lefkada closes the top 10 of the most beautiful beaches in Greece according to TripAdvisor.com.