Book on Greek Fishermen of Australia 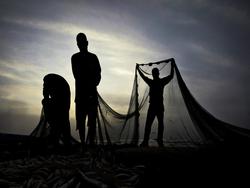 Fishing in Australia was for decades a “Greek business.” Even today Greeks manage its major part, while some of them have even become millionaires thanks to it. George Stavrinos, born in Greece on the Aegean Island of Lesvos and migrated to Australia (Melbourne) in 1959 by invitation was not that lucky.

The title of his first book, Empty Net, predisposes the reader from the beginning that fishing for him was not exactly lucrative.

Stavrinos said about his book, “The journey of hope began. With a vision for a better future, they dispersed around the country in search of any work they could find. Most found jobs on land, but very few turned their attention towards the fishing industry. Full of youth and liveliness, courage and dreams, they endeavored for a better life. Most of them succeeded and managed to create wealth. However, those that chose the sea and had no previous experience or knowledge of the compass were swept away in deep waters. Every migrant has a story to tell and a book to write.”

“I haven’t thought that I had to rely on captains and other fishermen. Men who, most of them were born next to the sea, they like fishing and are used to having “their plate empty ten times and one time full,” he added.

Neos Kosmos wrote about the presentation of the book on June 30 in Melbourne, “The book Empty Net: a journey of hope and uncertainty by George Stavrinos was launched last Sunday at the Pallesviakis Hall in Melbourne. Keen fishermen, avid readers and members of the Greek community all gathered for the launch of the book. The book is a true story, told from the first hand experience of George Stavrinos”.