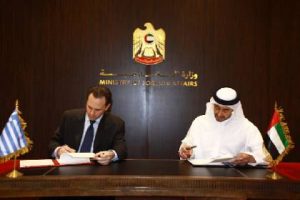 Greek Finance Minister, Yannis Stournaras, and UAE Minister of State for Financial Affairs, Obaid Humaid Al Tayer, signed on June 27 a protocol amending the agreement on the avoidance of double taxation that was signed in Abu Dhabi in 2010.

With this amendment the convergence of the standard Greek positions with the principles of the Organization for Economic Cooperation and Development (OECD) aiming at the avoidance of international double taxation is achieved.

According to the announcement, the conclusion of the protocol marks the beginning of an ambitious economic cooperation between the two countries and constitutes the first vital step for the attraction on the part of Greece of investments coming from the United Arab Emirates, which have shown keen interest in investing in various sectors of the Greek economy.

As mentioned in the relevant announcement, the conventions on the avoidance of double taxation with respect to taxes on income and on capital constitute a crucial tool for the development of a stable framework of investments and contribute to the establishment of the economic cooperation between the two countries, creating macro-economic conditions of trust and legal certainty concerning tax parameters.