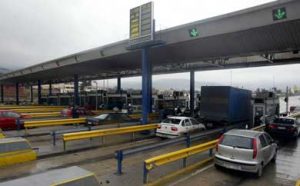 It has been reported that 43 new toll stations will be established on the national highways within the next years, a fact that will result in a rapid cost increase for the citizens using the roads.
It is expected that prices will triple, as by dividing the kilometers of highways by the number of toll stations, there will be tolls every 23 km.
It is expected that roads will be given to individuals for exploitation and as a result, in many cases,  the tolls’ price will be increased.
Only on Egnatia Odos, 21 new toll stations will be established, reaching a total of 26, six more will be set up on Olympia Odos (Corinth-Patras), while eight toll stations will be created on Ionia Odos, after its completion.
Even on the so-called main road, the axis of Trikala- Domokos, which will not link to any other road, a total of seven tolls will be set up.