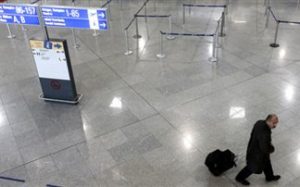 In a review, the Economist magazine says the 12-year-old Athens International Airport, Eleftherios Venizelos, is in “poor condition,” and suffering a big drop in traffic, although it has received generally good reviews from other analysts.
The airport, which was designed to handle 21 million passengers a year has seen only 12 million and suffered a 25 percent drop since 2007 during a growing economic crisis in the  country.
“Foreign airlines have fled,” stated the Economist. Delta axed winter flights to New York last year, leaving Greece without a direct connection to America for the first time in nearly 70 years.
United Airlines, Thai Airways, Gulf Air and Czech Airlines have also left. Last year Singapore Airlines moved its regional operation to Istanbul. Olympic Air’s brush with bankruptcy deprived it of its entire long-haul network, including routes to Dubai, New York and Johannesburg.
Intercontinental connectivity is far worse than at other southern European airports such as Madrid and Rome. “Although both the airport’s full-sized runways are capable of handling the Airbus A380 superjumbo, 59% of the airport’s traffic is now carried on narrow-bodies and turboprops to domestic destinations,” the magazine noted.
“It is now difficult to hide the fraying image of the airport that “opened to much fanfare 12 years ago,” the Economist concluded.