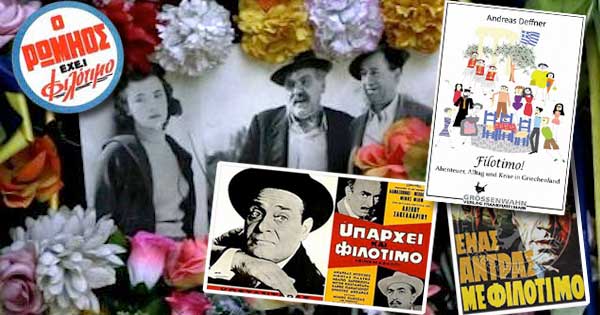 Filotimo or philotimo is a Greek noun comprising of the words philo (verb translated as “to like” or noun translating as “friend”) and timo (verb translating as “to honor”). It is hard to explain, impossible to translate in one word in any other language and so commonly used among Greeks that it is somehow believed that you are actually born with it and must stand up for it all your life. And just because filotimo represents a way of life for Greeks it includes ideas and virtues such as honor, justice, courage, dignity, pride, self sacrifice, respect, freedom, gratitude and hospitality.

In the past year Philhellene German Health Ministry executive, Andreas Deffner, published his book about Greece, its people, customs and the crisis plaguing the country entitled, Filotimo. In his attempt to explain the deepest meaning of the hard-to-translate word, Deffner used the simplified and humorous recipe, “Two or three positive thoughts, a liter of joy of life, 500 grams of hospitality, a whole ripe friendship, ten drops of helpfulness, a little pride, dignity and sense of duty”.
Philosopher Thales of Miletus also said that philotimo to the Greek is like breathing. Filotimo is considered to be the highest of all virtues among Greeks and is particularly praised when adversities and misbehavior occur. It defines behavior within the family and society.
Learning to live with filotimo begins at an early age when children learn to show respect and love for their parents and grandparents. Growing up, one begins to feel pride for their country and ancestry, helps friends with their problems and acts out of generosity without expecting anything in return. Being equal with others and respecting them is the key to realizing what filotimo means.
In Crete, during World War II, the locals risked their lives to help the Australian and British allies escape the Nazi powers, and they did so because of their filotimo, which at the time asked them to do anything within their power to fight for their country and help the foreigners who fought for them too.
According to Kostas Karderinis, dozens of Greek movies have featured the word filotimo over the years since 1955, when the most well-known road musical of Laterna, ftochia kai filotimo, made it to the cinemas of the time and became a major success often screened to date. The praised book of Giorgos Ioannou written between 1961 and 1964 is entitled, Gia ena filotimo (for the filotimo). Frank Tashlin’s crazy comedy Artists and Models was translated into Greek as Lordoi, lorda kai filotimo (lords, famish and filotimo). The Greek movie production, Yparhei kai filotimo, (we still have filotimo) with major Greek actor Lambros Konstantaras going through various adventures while running as a political candidate in a small village remains to date one of the most beloved movies of the old Greek cinema and fully in sync with the demand of Greek people for more transparency and honorable politics.

United Adds New Greece Flights from the US this Summer