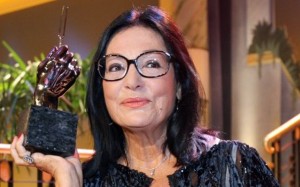 The internationally-renowned Greek singer Nana Mouskouri was honored by  McGill University in Montreal with an honorary Doctorate of Arts and Letters and said she was moved by the honor.

The awards ceremony was attended, among others, by the Ambassador of Canada to Greece Robert Peck, who warmly congratulated the Greek artist, who is extremely popular in Quebec and Canada.

She appeared in Canada for the first time in May 1965, where she accompanied Harry Belafonte in concerts for two consecutive weeks at Place des Arts in Montreal.

Mouskouri, who will be the guest of honor in the June 6 gala for the financing of Phrixos Papachristidis Chair in Modern Greek Studies at McGill, will make a grand tour in March 2014 in all major cities of Canada.