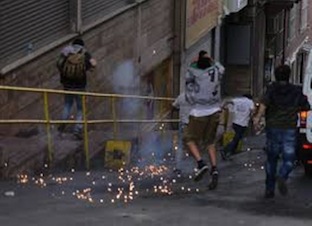 The protest against the demolition of Taksim Gezi Park in Istanbul turned into a massive anti-government demonstration after the Turkish riot police tried to violently break up a sit-in in the square. Soon enough thousands of protestors took the streets on June 1 and the Turkish police fired tear gas canisters and water cannons to disperse the crowds.

The Greek minority living and working in Istanbul was also affected by the turbulent events, as noted by an eye witness to a Greek news agency. Talking to NewsIt.gr, a resident of Istanbul Ms. Christina revealed that the Turkish police fired tear gas and chemicals indiscriminately right outside the Greek diaspora school Zappeio within which were Greek children. The tear gas war forced both children and the staff to stay inside the school for quite a long time and even when they did finally come out the children felt the awful consequences of the suffocating atmosphere.

As noted by Ms. Christina things in this part of the city were particularly dangerous, since the Diaspora school features also a kindergarten and preschool facility. The Church of the Holy Trinity as well as a nursery are located close to the Zappeion School. According to information, the Greek consulate called the police’s headquarters to inform them that the chemicals pose a threat to the children’s health, but the answer was that the police were following commands and there was nothing to be done.

As revealed by Ms. Christina the same situation prevailed opposite the Greek school where the school of the Armenians is situated, and noted that there were protesters outside, just a few people running away, but the police kept on firing chemicals.

According to Ms. Christina most Greeks in the city live around Taksim Square, which has been at the center of demonstrations and events for the past 48 hours. Most Greeks have fled their homes to the outskirts of the city.