TechNews
GreekReporter.com Greek News "What If" you never watch this interview with Christopher Papakaliatis...

“What If” you never watch this interview with Christopher Papakaliatis… 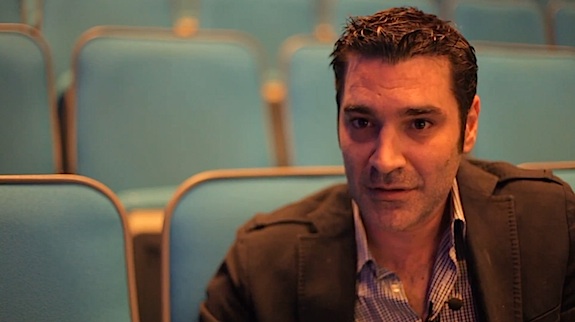 A mind-game of the daily possibilities we face in life unfolds in Christopher Papakaliatis’ latest movie titled “What if…” (“Αν” in Greek).  The Greek actor, director and writer who visited Hollywood for his film’s premiere talked to Greek Reporter about “What if…”, the Greek crisis, his obsession with love, and Hollywood!

“What if…,” Greece’s latest box office hit with more than half million tickets sold in less than six months, premiered at a special screening during the Gabby Awards weekend in Hollywood on Saturday, May 25 at 12pm.

Christopher Papakaliatis was born and raised in Athens, Greece in 1974. His father, Manuel Papakaliatis was born and raised in Crete while his mother, Villy Malamis, is from South Africa. Christopher was first casted in the age of 16 for a role in the TV drama series “Guards of Ahaia”. A drama series, based on a novel by Tassos Athanasiadis, which was aired in 1992 by Mega Channel (one of the biggest private TV channels in Greece).

After numerous roles in successful TV series as a teen actor in Greece, he decided to write his first TV script at the age of 23. “Our life is a path” was aired on Mega channel in the season 1999-2000 and was well received by critics and public. The following season he wrote and starred in the TV series “Take care of me” 2000-2001, and the following season he made the TV movie “Three wishes” 2001-2002. In 2003 he wrote and starred in the TV series “Close your eyes” which was one of the highest rating series in Greece. It was at that point that he decided to direct most of second and third season episodes with great success.

In the TV drama “Close your eyes” a kiss between two men caused a great debate in Greece (as it was the first time for two male characters to kiss on air) and was followed by a fine by the Greek National Council for Radio and Television but was later withdrawn by The Council of State.

In 2005-2006 he wrote, directed and starred in a new dram-thriller series “Two days only”, which had controversial reviews. “Two days only” was not a big success in the rating board, but was acclaimed artistically as one of the best filmed TV series.

In 2008 he wrote, directed and starred in the TV series “4”. A story about four male brothers and their different lives. “4” was a big success in Mega channel but due to the economical crisis in Greece was not able to continue to its second season and was cut off the air in the summer of 2010. It was the same year that he got accepted as a member of the International Academy of Television Arts and Sciences (EMMY International).

In 2012, he starred next to Catherine Deneuve and Sebastian Koch in the feature film “God loves Caviar” directed by Iannis Smaragdis. “What If” is his first feature film. The film was written and directed by him, while on the same time he played the leading role of Demetris.