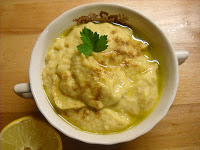 Fava beans from Lemnos win Monte Carlo! Customers of a very expensive restaurant in the principality are excited with this Greek product and consider it as one of the greatest appetizers served this month. Actually, the French advertise it as a dish of gourmet flavor.

An important element that makes this product stand out is that it is cultivated without pesticides. When the restaurant owners tasted the fava beans, they decided to include them in their menu and they did well  judging by the demand.

The cultivation of Lemnos fava beans which are already served in the island’s restaurants and in Athens as well, has returned in recent years. It was forgotten for 40 years until some seeds were found in some old warehouses. Last year 250 acres were cultivated yielding 15 tons.

According to Christos Salamousas – a cultivator of Lemnos fava beans – the mechanization of cultivation is achieved to some extent (until now there’s only a small export to France and the price of the dish is about 5 euros). They don’t have a big production yet, as over the last four years there was a pilot cultivation on the island. Since last year, the cultivation of fava beans has started to increase, in order to expand to more European countries, beyond Monte Carlo.