GRNews
GreekReporter.comHollywoodEthan Hawke, Julie Delpy on 'Before Midnight' and Greece

Ethan Hawke, Julie Delpy on ‘Before Midnight’ and Greece 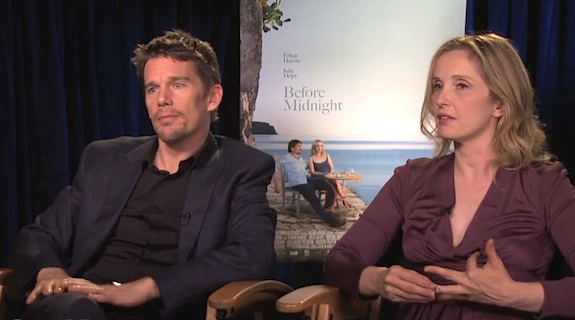 Greek Reporter spoke with Ethan Hawke, Julie Delpy and director Richard Linklater about their experiences filming “Before Midnight,” and why they decided to choose Greece as the backdrop for the third (and hopefully not final) film in the “Before” series.

Jesse and Celine rode through Vienna in 1995’s “Before Sunrise.” Then, they walked the streets of Paris nine years later in “Before Sunset.” Now, the couple find themselves strolling through the ruins of Greece in “Before Midnight.”

“Before Midnight,” which hits theaters May 24, begins with Jesse (Ethan Hawke) dropping his son, Hank, off at the airport in Kalamata. As Hank heads home to Chicago to be with his mother (and Jesse’s now ex-wife), Jesse struggles with finding a way to maintain a relationship with his teenage son. Meanwhile, Jesse and Celine (Julie Delpy), who are parents to twins, are also dealing with their own feelings and emotions towards each other.

Aside from Greece setting the stage for the continuation of the 18-year love story, “Before Midnight” also has a predominantly Greek cast and crew. Athina Rachel Tsangari, whose credits include many well-respected titles (“Attenberg,” “Alps,” “Dogtooth,” to name a few), produced and appears in the film, and she is just one of many Greeks who contributed to the making of “Before Midnight.”

We also caught up with the actors and director during the Los Angeles red carpet premiere Monday night at the Director’s Guild. Check out the interviews: