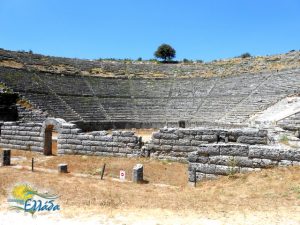 Thirty ambassadors of foreign states in Greece, from European, Asian and African countries, visited the archaeological site of Dodona, and in particular its internationally renowned ancient theater.
During their one-hour visit they were guided through all the Dodona monuments and expressed their admiration for the brilliance of the ancient Greek civilization.
The ancient site of Dodona is located 22 km south of Ioannina, in the narrow valley between the mounts Tomaros and Manoliassa. The first remains on the site date back to the prehistoric period and the first deity worshiped there was the Earth goddess. The cult of Zeus and the sacred oak tree were brought to Dodona by the Selloi, a branch of the Thesprotian tribe, between the 19th and 14th centuries B.C., and soon became the prevalent cult of the sanctuary.
The impressive ancient theater of Dodona, which is one of the largest theaters in antiquity with a capacity of 17,000 spectators, has withstood the passage of time and remains in very good condition (currently on restoration work), built in the early 3rd century B.C , during the reign of Pyrrhus.