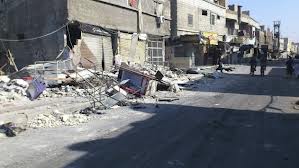 The Greeks of Syria are also suffering the catastrophe of the civil war that has taken many victims, including two Orthodox Bishops who are missing, and as the strife continues to grow.

Syria has many close historical and cultural ties with Greece. The Greek population of Syria is mostly concentrated in the country’s two big cities, Damascus and Aleppo, and in the village Al-Hamidiyah, which is located in the southern part of the country.

The largest modern wave of immigrants of Geek decent occurred after the Asian Minor Catastrophe of 1922. Damascus has 800-900 Greeks and there are Greek schools in both of the city’s largest cities. Damascus’ Greek community was begun in 1917.

The Greek community of Aleppo has reportedly exceeded that of Damascus in population, due to the immigration of many residents of the capital to Greece, in order to find a job. In 1982, with the help of the Greek embassy and particularly of the Church, the Greek community of  Aleppo was given its own space for Greek language courses, the Prophet Elias school, which is attended by about 50 people.

The Greek school in Damascus was founded but stopped operation about 10 years ago. Representatives of the Greek-speaking communities of both cities agree that seconded teachers from Greece, often cannot integrate into local society and they are not sufficient to cover the educational needs.