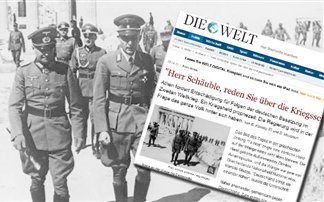 With Greece deciding to press for some 160 billion euros ($208.45 billion) it says it’s owed in WWII reparations for damages and forced loans to the Nazis, a commentary in Germany’s influential newspaper Die Welt said Germany should consider waiving part of Greece’s huge debt burden.
The piece notes that Greek authorities have expressed their determination to press demands for war reparations and “bring the matter to a conclusion.” Under the headline Mr. Schaeuble, Talk About War Reparations!” the article notes that Greece’s demands were first made by leftist veteran Manolis Glezos, a war hero who tore down the Swastika from the Acropolis in 1941, but have since been embraced by a government “under pressure to prove that it is not Germany’s lackey.”
He was referring to German Finance Minister Wolfgang Schaeuble, a hardliner on Greek austerity measures and debt repayment. Germany is the biggest contributor to $325 billion in two bailouts for Greece, on the condition of big pay cuts, tax hikes and slashed pensions.
The commentary quotes Greek Foreign Minister Dimitris Avramopoulos who told Parliament last week that the question of war debts remained “open” and that the government will take “decisive steps” after receiving legal advice on how to proceed.
The article also referred to a “moral imbalance” that could put Germany under pressure to show “some symbolic goodwill sooner or later” such as a partial waiver of Greece’s debts, which might be necessary eventually “as Greece will never be able to repay them.”