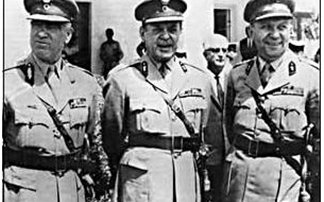 Unrepentant defenders of Greece’s brutal military dictatorship, the junta carried out by the Colonels, will gather on April 21, the 46th anniversary of the government’s takeover, to commemorate what they believe was a great period in Greek history.
The featured speaker at the event will junta apologist Paraskevas Bolaris, from the so-called Pajamas Movement, with speeches from Aristides Dimopoulos, a close colleagues of the late dictator George Papadopoulos, and a greeting from Papadopoulos’s cousin Angelos Papathanou, who was director of the political office.
There will also be a presentation of the book Comparative History August 4 – April 21, where the author Manos Hatzidakis will talk about the regimes of Greece then.
As part of the political commemoration of junta an audiovisual material will be screened. The event will be held at 7 p.m. at the Hotel President. Papadopoulos’ widow, Despina, has also been invited.
The 1967 coup and the following seven years of military rule were the culmination of 30 years of national division between the forces of the Left and the Right that can be traced to the time of the resistance against Axis occupation of Greece during World War II. After the liberation in 1944, Greece descended into a civil war, fought between the communist forces and the now returned government-in-exile.
Papadopoulos is still revered by some Greeks, including the neo-Nazi Golden Dawn party which adores the dictatorship period. He was a Nazi collaborator who worked for the CIA
The junta tortured and exiled many people and stifled free speech and was backed by the United States which wanted to keep down Communism, for which many Greeks have never forgiven American leaders.
After a student-led rebellion in 1973 brought down the dictatorship the next year, he was later sentenced to death, which was commuted to life imprisonment. He died in 1999 at 80, unapologetic for his actions.