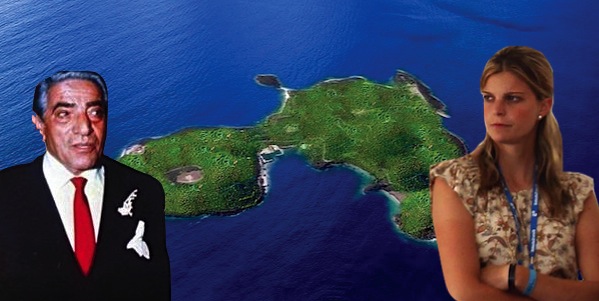 Athina Onassis has agreed to sell Skorpios to the daughter of Russian billionaire Dmitry Rybolovlev. The private island was bought from Athina’s grandfather, legendary tycoon Aristotle Onassis, in the 1960’s but until today she was the sole owner of the property.

The contracts for the deal are being drafted by two major law firms, one of which is based in Geneva, Switzerland and the other in Athens, Greece. The reports present the sale as done deal and both parties ready to sign.

“A company belonging to a trust acting in the interest of Ekaterina Rybolovleva has completed the purchase of a group of companies formerly ultimately owned by Mrs Athina Onassis, said a representative of the Rybolovlev family to Greek Reporter.

“Amongst the assets of this group of companies are the islands of Skorpios and Sparti. Ekaterina is delighted that the trust has negotiated this purchase. She sees significant potential for further improvement of the islands using environmentally friendly technology and regards the acquisition as a long-term financial investment.”

Skorpios is mainly known as the private island of the late Greek shipping billionaire Aristotle Onassis. He bought it in 1962 for 3 million Greek Drachmas. It was the site of his wedding to former First Lady Jacqueline Kennedy on October 20, 1968 which brought the island onto international spotlight.  The media went crazy for both the celebrity couple and the idea of private islands, and owning one quickly became the highest symbol of wealth and status.
Upon his death it passed to his daughter Christina, and then in turn to her daughter Athina Roussel – Onassis. Onassis, his son Alexander, and his daughter Christina are all buried on the island.
Little is known about Athina’s relationship to her former private island, however she is believed to have spent very little time there.
The island is heavily forested from south to north and features over 200 varieties of trees imported to the once nearly barren island by Aristotle Onassis. There are some sandy beaches, most notably East Beach, which was created by Onassis who brought sand from Salamis island for this purpose.
There is also a small sand beach where the Myconos house, formerly known as the “Pig House” is located.  This was where Jackie Onassis was infamously photographed nude by a Greek paparazzo.
Among the many celebrities who had shown interest in buying the island in the past are Madonna and Bill Gates.
While the amount of the sale has not been known yet, financial publications estimate the private island’s value at over $100 million USD.
Athina Onassis has not made any statements on the reported sale.

Watch a video from Skorpios: