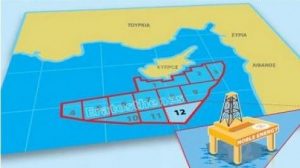 In an interview to the Cyprus Broadcasting Corporation (CyBC), Solon Kassinis, second vice-chairman of the Cypriot National Hydrocarbon Company (KRETYK), said that Cyprus could reserve in advance some sales and generate revenues until the end of the year and the beginning of 2014. About the liquefaction machine, he noted that the initial project is expected to be completed by June.
“The second confirmatory drilling by the American Noble Energy at block 12 of the Aphrodite gas field in Cyprus’ maritime Exclusive Economic Zone will definitely begin in June,”stated Kassinis. “In the autumn, the exact hydrocarbon quantities will be known. The necessary preparations are already being made at the marina of Limassol,” he added.
The executive director of KRETYK also said that, during his visit to Israel, Ioannis Kasoulides, Minister of Foreign Affairs of Cyprus, and George Lakkotrypis, Minister of Energy, Commerce, Industry and Tourism, will examine the possibility of utilization of Israeli natural gas.
“These bilateral meetings will make thing clearer on the topic,” Kassinis mentioned.
The relevant agreements will be signed in May, when the president of Cyprus Anastasiades will visit Israel. Similar delegations will visit Lebanon in the future.