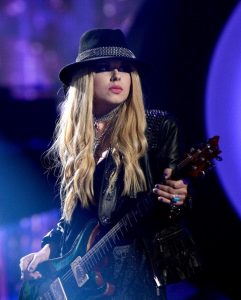 Singer/songwriter Orianthi appeared on last night’s episode of “American Idol,” backing the contestants on guitar as they performed during Rock Week.

The Greek-Australian musician jammed out alongside each “Idol” contestant to songs including Bon Jovi’s “You Give Love a Bad Name,” The Rolling Stones’ “(I Can’t Get No) Satisfaction,” and Queen’s “We Are the Champions.”

It’s not the first time Orianthi appeared on the reality singing competition. Back in 2010, she performed her single, “According to You,” on the “Idol” stage. Her latest album, Heaven In This Hell, is currently available on iTunes.

Her full name is Orianthi Panagaris, and she is perhaps best known for being Michael Jackson’s lead guitarist during his This Is It concert series, as well as the lead guitarist in Alice Cooper’s live band. In 2009, Orianthi was named one of 12 Greatest Female Electric Guitarists by Elle magazine. She also won the 2010 award for “Breakthrough Guitarist of the Year” by Guitar International magazine.

Watch a past Greek Reporter interview with Orianthi below: