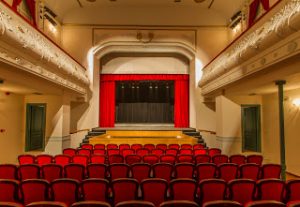 The Malliaropouleion Theater of Tripoli is reopening its doors to the public on March 22, the first day of spring. It is the theater emblem of the town, and among the few perennial theaters in Greece.
It was donated to the public by Doctor Ion. Malliaropoulos. It was built according to the architectural designs of Anastasios Metaxas, the Palace’s architect and the first opening was in February 1910. Since then, it has hosted many theatrical performances and leading Greek actors. However, negligent authorities as well as the country’s adventures from 1940 and after led to its deterioration.
Until the mid-1960’s, the Malliaropouleion hosted some traveling theater companies and every kind of local event, but functioned mainly as a cinema. A decade earlier, many people claimed that if the theater was demolished, the most central and expensive building plot of the town would be released to be used in more appropriate and profitable ways.
During the dictatorship, the decision to demolish the building was issued, and in 1975 its roof collapsed, a coincidence that countersigned the aforementioned decision. At the time, many people reacted against the demolition of the historical building. Among them were some distinguished intellectuals of Athens and as a result, the authorities decided to rescue and reopen the theater.
It was entirely renovated and on Dec. 29, 2010, the opening ceremony took place, but the theater never operated. March 22, is going to be the first day of a new period of life.