Stoa Poikile to be Further Uncovered 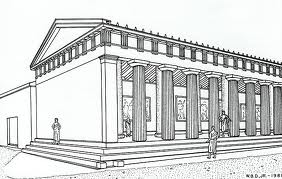 The American School of Classical Studies in Athens is all set to continue excavations at the site of the Stoa Poikile in Monastiraki, Athens downtown, which is of archaeological significance. The School had its wish unanimously granted by the Central Archaeological Council on March 19, and will now proceed with the purchase or expropriation of the plots located at Agiou Philippou St. 20, and Andrianou and Agiou Philippou 14.
These two buildings of the early 19th century -the only buildings of the time remaining on the eastern front of the square – today house health care businesses and have undergone many construction and restoration works. Their removal will help uncover a wider part of the ancient monument, which is expected to convey important historical information.
The plot located on Agiou Philippou 14 stands right above the mid-5th century BC Stoa, hiding a long section of its back wall, interior and exterior columns, while the plot on the corner of Adrianou and Agiou Philippou 20, covers the area right in front of the Stoa and partially the Eridanos river.
The Stoa Poikile or Painted Porch, originally called the Porch of Peisianax, was erected during the 5th century BC and was located on the north side of the Ancient Agora of Athens. The Stoa was the location from which Zeno of Citium taught Stoicism. The philosophical school of Stoicism takes its name from having first been expounded here, and was derived from the Greek word stoa. Zeno taught and lectured to his followers from this porch.
Excavations carried out by the American School of Classical Studies in Athens over the past two decades have revealed many of the foundations and some lower elements of the stoa on the north side of the Athenian Agora- a Doric columnar facade and an Ionic interior colonnade. The Stoa Poikile was decorated by fresco painter and sculptor Micon of Athens in collaboration with Polygnotos of Thasos, artists who worked around the mid-5th century BC.