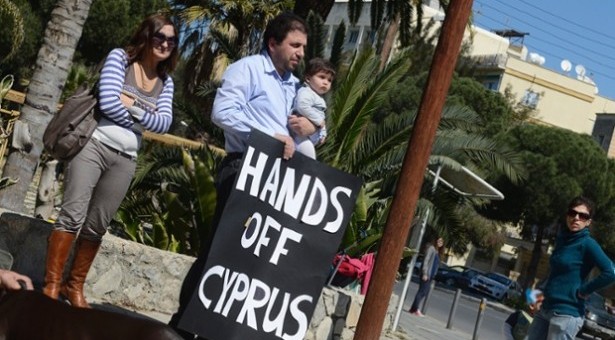 With reports that new Cypriot President Nicos Anastasiades admitted he didn’t have the votes to pass a confiscation tax of up to 9.9 percent on bank deposits and force account holders to pay part of a bailout ordered by international lenders, Eurozone finance ministers agreed late on March 18 that the government can change the terms as long as it still raises 5.8 billion euros, some $7.5 billion.
The original plan was for an alleged one-time only tax of 6.75 percent on accounts to up 100,000 euros ($130,000) the ceiling set to guarantee the safety of the deposits, and 9.9 percent for those over 100,000 euros. Now, however, the government may be allowed to lower or scrap the tax for accounts under 100,000 euros, but would have to make it up with higher taxes for amounts over that, which some analysts said could lead to a run on the banks with big account holders taking out all their money.
That won’t be possible until at least March 21 as the government ordered the institutions to stay shut to prevent a run on the banks which could lead to their overnight collapse. Anastasiades, who campaigned against the tax but agreed to it only a few weeks after taking power, was feeling the heat and reportedly sent a message to European Union officials, and indirectly to German Chancellor Angela Merkel whose government puts up much of the bailout funds, that he didn’t have the votes to get it through in the face of public fury.
The Cypriot Parliament will vote on the measure late on March 19. The report on Greek Mega TV said that Anastasiades called the EU’s finance chief, Olli Rehn, as well as a German Member of the European Parliament Elmer Brok, who is close to Merkel, to tell them the plan would fail unless he could change it.
“When I warned you that there would not be a Parliamentary majority to pass the agreement, you didn’t want to listen. Give my regards to Mrs. Merkel,” Anastasiades was reported to have said but his office wouldn’t comment. She is preparing for federal elections in September and reportedly didn’t want to ire German taxpayers who would have to foot part of the bill as well.
The international lenders said they would put up 10 billion euros ($13 billion) in a bailout to help prop up the country’s economy that was near collapse because Cypriot banks had huge holdings in Greek bonds that former Greek finance minister Evangelos Venizelos devalued by 74 percent in a frantic to write down Greece’s crushing debt and have someone else pay for it.
But the deal meant Cyprus had to take another 5.8 million euros from bank customers as the bailout would have been 17 billion euros ($22 billion.) Eurozone chief Jeroen Dijsselbloem, in a statement, wrote that, “The Eurogroup continues to be of the view that small depositors should be treated differently from large depositors and reaffirms the importance of fully guaranteeing deposits below 100,000 euros.”
There were earlier reports that Anastasiades had the choice to exclude them but didn’t, which his office denied, but Reuters indicated that uncomfortable EU officials apparently were trying to shift the blame on him and that the President, worried that the rich would flee Cypriot banks if taxed too much, wanted smaller savers to be taxed as well. The news agency also said the tax on those with more than 100,000 euros in deposits now could be 15.6 percent instead of 9.9 percent, as well as a tax on earned interest up to 25 percent.
“The Cypriot authorities will introduce more progressivity in the one-off levy compared to what was agreed on 16 March, provided that it continues yielding the targeted reduction of the financing envelope and, hence, not impact the overall amount of financial assistance up to 10 billion euros.”
A 17 billion euros bailout would be nearly equivalent to the country’s entire Gross Domestic Product (GDP) making it unlikely it would ever be repaid. Either way, Anastasiades faces a political and economic dilemma. If the Parliament passes even a revised plan, big depositors, facing confiscation of a big chunk of their savings, could withdraw all the rest of their money. If the Parliament rejects the bill, the ECB will stop liquidity to the banks and the President said they would fall and chaos would ensure.
Cypriot banks have about 68 billion euros ($88.1 billion) in assets, some 40 percent held by foreigners, mostly by Russians. EU officials said they were wary that the Cypriot banks were being used to launder illegal money from Russia, but Cypriots who have their life savings in the banks could still find much of their money seized by the government, an unprecedented move critics said could destroy confidence in the banks and even lead to their collapse in Cyprus, and perhaps other countries if depositors fear their governments will do the same.
Russia’s banks and companies have $31 billion Cypriot banks, according to estimates by Moody’s Investor Services, on top of almost as much in Russian bank loans to Cypriot companies and Russian President Vladimir Putin is furious over the measure amid reports Russia, which had offered bailout loans to Cyprus as well, might withdraw them.