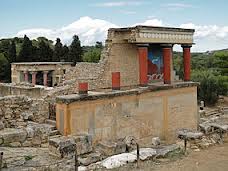 Crete  is still pushing for Knossos to be a UNESCO World Heritage Site, and is now preparing a new folder titled Minoan civilization, which will include the most important monuments on the island, such as Phaistos, Zakros and the archaeological site of Malia, with Knossos dominating the list.
Competent authorities who are editing the file with the code name Minoan civilization, estimate that this project could pave the way for including Knossos on the UNESCO world heritage list. The construction problems identified around the area of the Minoan palace that impede the monument’s inclusion might be minor matters since the file will not focus only on the palace, but also on all the monuments of the Minoan civilization.
The unification of the wider archaeological site of Knossos and Messara is a pilot program for the creation of a Cretan archaeological sites network which is also the first step to promote the claim to be included in the World Heritage of UNESCO. This was noted during a meeting between the local governor, Stavros Arnaoutakis  and deputy governor of Heraklion, Euripides Koukiadakis. The men signed two major contracts on studying the process concerning the inclusion of the broader archaeological sites of Knossos and Messara.
The first contract refers to Unification of Archaeological sites of Knossos, Karteros, Archanes, and the second one refers to the study, Unification of Archaeological Sites Messara – Phaistos, Gortyna, Agia Triada, Kommos etc.