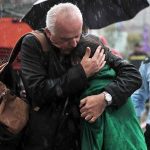 With suicide increasing in Greece during the country’s crushing economic crisis – a woman was talked down from a sculpture in Omonia Square during rush hour morning traffic in Athens on March 11 – the Supreme Court has ruled that an attempted suicide can be considered a workplace accident for which the employer has to pay damages if undue pressure is exerted on an employee.
In a decision made public, Greece’s highest court ruled that a firm manufacturing cold cuts in northern Greece should pay a former employee 60,000 euros ($78,000) after she attempted to kill herself.  The unnamed woman slit her wrist in 2008 after being pressured to work a second job as a cleaner at another company that was part of the group owning the factory she worked at. She was fired three months following her return to work after recuperating from her injury.
The incident in Omonia ended peacefully after the woman, who was said to be deaf, was talked down three hours later. She had ascended a dirty metal sculpture that is the only adornment in a filthy cement centerpiece that once had trees and fountains before gradually turned into a gathering place for transients, drug users, immigrants and criminals.
The woman climbed onto the sculpture  about 7 a.m. and threatened to jump before being persuaded to come down on her own. Police said they believe that she was probably the same person who had climbed onto the statue in December threatening to kill herself.
Earlier this month, three people in central Greece killed themselves on the same day and analysts said there is a correlation between the rising rates and three years of pay cuts, tax hikes and slashed pensions that have pushed many people into poverty.