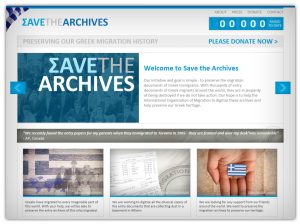 Greek-Canadian entrepreneur George Stroumboulis, who already has two enterprises promoting purchases of property in Greece to his credit, now is operating Save the Archives.com, hoping to preserve the migration history of Greek immigrants through the digitization of entry archives.
With the support from the Greek diaspora, Save The Archives is raising awareness and collecting donations to help the International Organization for Migration (IOM) in Athens to facilitate the digitization process.
Stroumboulis, who now lives in New York, said his goal is to make sure an essential part of Greek migration history to the United States, Canada, Australia and South Africa from 1950-75  is not lost to time. There are an estimated 200,000 documents and Save The Archives hopes to raise 25,000 euros ($32,550) to preserve them and work with the International Organization for Migration (IOM).
Stroumboulis said he first became aware of the migration documents during a visit to Athens in March 2012. After meeting with the Head of Office for IOM Athens, Daniel Esdras, and discovering that they were in their original paper form and needed to be protected from possible deterioration, the initiative to Save The Archives was born.
“Greeks have migrated to every imaginable part of the world – integrating within different communities while maintaining their rich culture and heritage” said Stroumboulis. “Being a first generation Greek-Canadian, the idea of helping ignite a movement that would help preserve the entry archives of my parents, and those archives of thousands of other Greeks around the world, was an inspiring challenge.”
The Save The Archives initiative was launched to coincide with two important anniversaries between Greece/Australia and Greece/Canada in 2012 as well, as that marked the 60th anniversary of the Assisted Migration Agreement (AMA) signed in 1952 between Australia and Greece.
Thousands of Greeks migrated to Australia following the conclusion of the (AMA) under the auspices of the Intergovernmental Committee for European Migration (ICEM), later to become the International Organization for Migration (IOM).
Upon achieving the financial goal, the funds will be donated to IOM Athens which will undertake the digitization of the paper archives, Stroumboulis said. With strong support coming from the Greek diaspora, specifically from Australia, plans on how the digitized archives will be presented are under way.
Following the digitization process, scholars and diplomats from Australia have discussed the creation of an online portal that can make the archives easily accessible by the Diaspora. Those interested in supporting the Save The Archives initiative are encouraged to visit the website, www.SaveTheArchives.com. Visitors to the website can obtain more information and learn how they can make a donation.
Supporters can stay connected and donate by visiting www.SaveTheArchives.com. Facebook fans can LIKE us at www.facebook.com/SaveTheArchives.com and Twitter followers can follow us at www.Twitter.com/SaveTheArchives. For more information, email info@SaveTheArchives.com