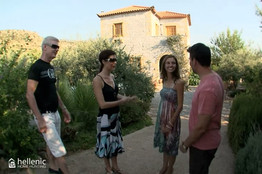 Greek-Canadian website entrepreneur George Stroumboulis, who already has the Hellenic Property Exchange to his credit, which gives people around the world a chance to look at homes and properties in Greece, has extended it a Greek TV station and found something unexpected: while people around the world are interested in Greek homes, Greeks aren’t.
A report in the Wall Street Journal detailed the oddity, but the unflappable Stroumboulis, only 31, said he isn’t deterred. The reality show, Hellenic Home Hunting, follows prospects touring homes in search of the perfect find. Filmed in English with Greek subtitles, it is one of the first shows of its kind for the network, which had yet to test the house-hunting niche already popular in the U.S.
Here’s the catch, WSJ noted. It isn’t being shown in Greece. “Greeks in Greece don’t care about it,” said Stroumboulis, who now lives in New York. The show made its debut early this month on Greek TV network Antenna in North America, most of Europe and Australia.
Greeks, of course, aren’t in a home-buying mood as pay cuts, tax hikes and slashed pensions and falling home values have kept their eyes on survival, but there are bargains to be had for those who can afford them.
With home prices falling roughly 40% since the Greek housing market’s peak in 2008, prices are expected to continue to drop at least through the first half of this year, according to the Hellenic Association of Realtors. Some agents say price cuts can run as deep as 60% to 70%.
Stroumboulis told the WSJ that selling prime real estate to foreigners isn’t the same as selling out. He and his crew wore T-shirts throughout the filming that read, “Greece is not for sale, but its real estate is!”
Reactions were mixed. During filming, onlookers at Athens’s famous protest site, Syntagma Square, seemed understanding, if a bit guarded, he said, and interested most of all in getting their own homes featured on the show.
“When it’s lowball (offers) from Greeks within Greece, they’re insulted, but when it’s foreigners, we entertain offers,” he said. Stroumboulis has never lived in Greece, but like many second- and third-generation Greeks living abroad, he said that sees the show as an effort to help the homeland while getting a good deal.
The show also underscores the difference between looking and buying, especially in Greece, which has the unfortunate image of trying to swindle foreigners and laws that make it difficult to purchase homes and lands.
“All the foreigners are hesitant, because, on the one hand, they think Greeks are con artists, and on the other hand, the bureaucracy is chaotic,” said George Moutzouris, an agent on Lesbos, an island in the Aegean Sea.
But the interest is there, the newspaper noted. Helen Robinson, a 61-year-old manager of a cattle ranch in Australia’s North Queensland, said she briefly lived in Greece in the 1960’s before political tumult forced her Greek father to move the family out of the country.
Now she is looking to buy a four-bedroom villa near her father’s village in southern Lesbos for 255,000 euros or about $340,000. Four years ago, the same home would have cost 100,000 euros more, said listing agent Dimitra Balkizas, who guided Robinson on the show.
Hellenic Home Hunting’ also followed Sudha Nair-Iliades, 43, a magazine publisher, on her house hunt. She moved to Greece about 12 years ago with her husband, Stephane Iliades, 55, a third-generation Greek who works in private equity. Neither of them had lived in Greece before working there, but Ms. Nair-Iliades said she was taken by Athens’s energy. “I like the craziness and the anarchy of it as well, which reminds me a little bit of living at home,” in her native India, she joked.