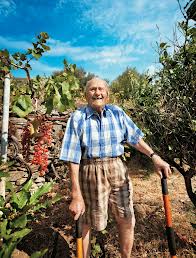 On Feb. 3, Stamatis Moraitis, the dear “grandpa” of international media, who did not remember his exact age – 98 or 102- passed away, 36 years after doctors had diagnosed him with lung cancer.
At the time, nine other doctors confirmed the diagnosis, and had given him nine months to live.
In several interviews he had confided that the secret of his longevity was the wine of his own production and Ikarian products. Moraitis thought of staying in the USA, where he went to receive cancer treatment.
He returned to Ikaria to live the rest of his life. He refused to undergo chemotherapy and did not accept the medication American doctors had prescribed. All he cared about was his garden and his parents’ vineyards. The peak of irony is that when he returned to America to visit his doctors, as his health gradually improved, he found out that they had all died.
“I expected to die, but it just was not happening. At night, I walked up to the tavern where I was playing backgammon and drinking wine with my friends until midnight,” he said in an interview. His funeral will be held on Feb. 6.