Qatar Gives Up on Hellenikon Bid 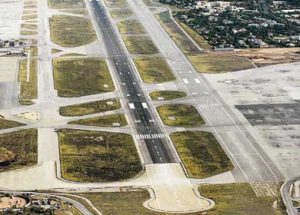 Just as Greek Prime Minister Antonis Samaras is readying a trip to Qatar as part of a wider plan to attract foreign investors, Qatar has pulled out of the bidding for the development of the site of Athens’s former international airport at Elliniko.
The land, adjacent to the sea and lying dormant for more than a decade, was supposed to become the biggest part in Europe but the government is putting it up for development because of a crushing economic crisis and demands from international lenders to speed the pace of privatizations.
The tender details issued by the Hellenic Republic Asset Development Fund (TAIPED) last week were only picked up by three interested parties instead of the four that the fund had short-listed for the second round of bidding, the newspaper Kathimerini reported.
The three bidders that are still in the running for the development and utilization of the Elliniko plot are Israeli-based Elbit Cochin Island Ltd, the Latsis Group’s Lamda Development and Britain’s London & Regional Properties. According to the terms of the tender, the three suitors will have to submit their business plans for the development of Elliniko within six months.
The Qatari Diar Real Estate Investment Co, a subsidiary of the Qatar Investment Authority (QIA) that had initially taken part in the tender, did not come to sign the documents of confidentiality to receive the tender details for Elliniko.
Qatar’s departure from the tender constitutes a blow for the tender, as it will reduce the level of competition for the property. QIA manages some 100 billion euros and was seen as one of the most desirable suitors in the project. Kathimerini said Elbit is seen as the favorite.
The Finance Ministry confirmed the targets of the government’s privatizations program. Minister Yannis Stournaras and TAIPED chief Takis Athanasopoulos agreed in a meeting that at least five sell-off projects will have to be completed in the first quarter of the year and another 11 will need to get going within the first half of 2013. Among the privatizations that must be completed by end-March is that of the OPAP gaming company.
Kathimerini said that a high-level ministry official said that besides OPAP, TAIPED will have to complete the projects concerning the Public Gas Corporation (DEPA), the gas transmission network operator (DESFA), and the properties at Afandou on Rhodes and Cassiope on Corfu. The TAIPED board is scheduled to meet on Jan. 16 to approve the terms of the contracts for the privatization of DEPA and DESFA.