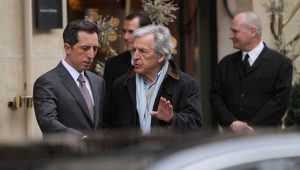 “Capital,” the new political thriller by Greek-French film director Costa-Gavras is to premiere in Athens on Jan. 14. The new movie shows the head of a large European investment bank (played by France’s top humorist, Gad Elmaleh) desperately clinging to power as an American hedge fund company tries to buy out his company.
The film tries to capitalize on the recent times of economic hardship and crises in a number of countries and depicts a ruthless, fierce, cruel and greedy financial world.
On Jan. 8 at the House of Arts and Letters in Athens, people gathered to meet and talk with the acclaimed director. He told them: “Behind the charm of a banker, his education and cultivation, there also hides a dark side, that of business world. We live in an era of savage capitalism. The role of the film or the director isn’t to give a solution to the huge problems we are dealing with. The solution will come from the people who are voting. We must know who we choose and why we choose them. That’s the problem. And that has been a Greek problem, for many, many years.”
When asked  about French film star Gerard Depardieu seeking Russian citizenship because of a dispute over the coming 75 percent French tax rate on the rich, he said “We have to tolerate it. He has been the leading French actor after Jean Gabin. We have loved him so much, that we cannot just forsake him from one moment to another.”
He also talked about the late film director Theo Angelopoulos, killed when hit by a motorcycle in Piraeus as he was directing a film last year and said that, “Both his talent and the world he creates, move me. I am an admirer of Theo’s work. He was and will, as well, remain a great director. He played an essential role in Greek Cinema dissemination in an international level.”